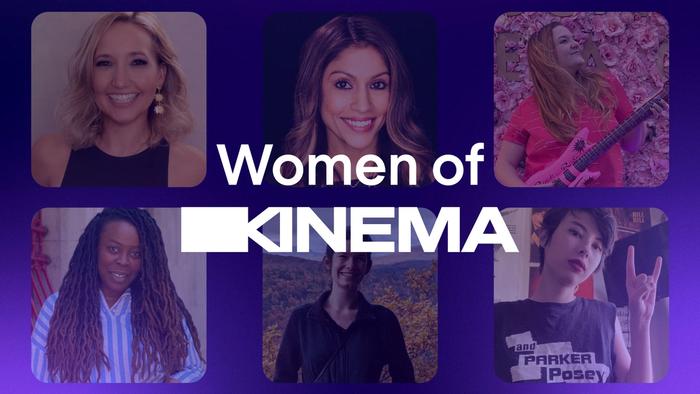 For Women's History Month, we're spotlighting the women on our team who help make Kinema, well, Kinema! Considering the depressing statistics regarding the number of women in the film industry (though our numbers are growing!), it's vital to us that the work we highlight strives to offset this systemic imbalance. Learn more about us, our favorite movies, and more below!

Name: Christie
Role: Founded Kinema!
Woman film character you most identify with: Still relating to Hermione Granger well into my 30s.
Favorite film directed by a woman:
Favorite classic: Clueless (1995) dir. Amy Heckerling
Favorite repertoire: Little Women & Lady Bird dir. Greta Gerwig
Favorite recent:  Promising Young Woman (2020) dir. Emerald Fennell
Favorite tentpole: Wonder Woman (2017) dir. Patty Jenkins
A fun ~Girls Night Out (Or In!)~ movie memory:  A fun recent all-girls memory was being away on a vacation with a close group of girlfriends, some of whom had never seen Practical Magic. So we piled into the TV room of the place we were staying and played the film, loving that sisterhood magic. I’m lucky to have a few girlfriends that will always say yes to going to the theater for the random indie flick.

Name: Sejal
Role: Head of Product
Woman film character you most identify with: Alex Owens, but maybe because I grew up watching Flashdance (1983) and wanting to be a dancer.  So perhaps I identified with her because I wanted to be her!?
Favorite film directed by a woman:  Bend it Like Beckham (2002) dir. Gurinder Chadha or Clueless (1995) dir. Amy Heckerling.
A fun ~Girls Night Out (Or In!)~ movie memory: Watching the latest Cinderella with my daughter Ruby and our new outdoor movie theater!

Name: Deanna
Role: Head of Community
Woman film character you most identify with: Dottie Hinson (Geena Davis) from A League of Their Own (1992).
Favorite film directed by a woman: Titane (2021) dir. Julia Ducournau.
A fun ~Girls Night Out (Or In!)~ movie memory: At the start of the pandemic, my best friend and I started a Nicolas Cage movie club. We have kept it going since March 2020 and have now watched 53 Nicolas Cage movies together! We saw Pig in theater and are planning on going to the opening night of The Unbearable Weight of Massive Talent. When you search "How many Nicolas Cage movies are there?" even Google isn't sure – it says "At least 122."

Name: Saskia
Role: I make sure our filmmakers are happy and supported during their tour on Kinema.
Woman film character you most identify with: Bridget Jones from Bridget Jones’s Diary (2001).
Favorite film directed by a woman: Staying with the group and going Clueless (1995) dir. Amy Heckerling on this one!
A fun ~Girls Night Out (Or In!)~ movie memory: Channeling Tina Turner with my friends at Washington Commons in Brooklyn.

Name: Emily
Role: Graphic Designer
Woman film character you most identify with:  I feel like every bookworm my age grew up identifying with Belle from Beauty and the Beast (1991)!
Favorite film directed by a woman: Meshes of the Afternoon (1943) dir. Maya Deren.
A fun ~Girls Night Out (Or In!)~ movie memory: High school sleepovers featuring VHS screenings of Disney deep cuts or Turner Classic Movies.

Name: Mia
Role: Copywriter and social media maven!
Woman film character you most identify with: O-Ren Ishii from Kill Bill Vol. 1 (2003).
Favorite film directed by a woman: Mikey and Nicky (1976) dir. Elaine May.
A fun ~Girls Night Out (Or In!)~ movie memory: When I lived in Portland, my co-worker at Powell’s Books and I would go to her house after our shifts to watch movies in her garage. One time, we and her roommates crowded around a tiny laptop screen to watch Red Road (2006) dir. Andrea Arnold, and we were completely riveted – the group all stood up to cheer at one point. A truly great indie psychological thriller to watch with the girls!

Finally, check out our Power of Women film collection -- hosting and attending screenings of movies made by women filmmakers are great ways to actively support them and effect real change in the industry. Happy Women's History Month! 💖